Wi-Fi (or WiFi) is a local area wireless computer networking technology that allows electronic devices to connect to the network.To access this type of connection, one must have a wireless adapter on their computer. Wi-Fi provides wireless connectivity by emitting frequencies between 2.4 GHz to 5 GHz based on the amount of data on the network. Areas which are enabled with Wi-Fi connectivity are known as Hot Spots. One can use advanced softwares like Wirelessmon to detect and request connection to Hotspots. To start a Wireless connection, it is important that the wireless router is plugged into the internet connection and that all the required settings are properly installed. 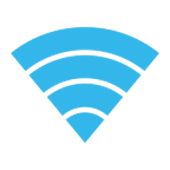 What is WiFi and how does it work?

Wireless technology has widely spread lately and you can get connected almost anywhere; at home, at work, in libraries, schools, airports, hotels and even in some restaurants.
Wireless networking is known as Wi-Fi (Wireless Fidelity) or 802.11 networking as it covers the IEEE 802.11 technologies.
The major advantage of Wi-Fi is that it is compatible with almost every operating system, game device and advanced printer.

Like mobile phones, a Wi-Fi network makes use of radio waves to transmit information across a network.
The computer should include a wireless adapter that will translate data sent into a radio signal.
This same signal will be transmitted, via an antenna, to a decoder known as the router. Once decoded, the data will be sent to the Internet through a wired Ethernet connection.
As the wireless network will work as a two-way traffic, the data received from the Internet will also pass through the router to be coded into a radio signal that will be receipted by the computer’s wireless adapter.

A wireless network will transmit at a frequency level of 2.4 GHz or 5GHz to adapt to the amount of data that is being sent by the user.
The 802.11 networking standards will somewhat vary depending mostly on the user’s needs, as explained below:

The term Hotspot is used to define an area where Wi-Fi access is available.
It can either be through a closed wireless network at home or in public places like restaurants or airports.

As stated earlier, to be able to access Hotspots your computer should include a wireless adapter.
If you are using an advanced laptop model, it will probably include a built-in wireless transmitter already.
Otherwise you can purchase a wireless adapter that will plug into the PCI slot or USB port. Once installed, your system will automatically detect the Wi-Fi hotspots and request connection.
If not, you should use a software to handle this task for you.

How to make a WiFi connection

1. To start your connection with a wireless router, ensure that it is plugged into the internet connection point.
2. You should turn on your external modem first before plugging the router into your computer via an Ethernet cable.
3. Switch on your wireless router until it fully starts up and open your internet browser.
4. For Belkin users, enter http://192.168.0.1.
5. For Linksys users, enter http://192.168.1.1
6. If you are not using either service, enter http://192.168.2.1
7. Then, you can file in your router’s username and password.
8. Set the SSID (wireless capability) active.
9. Type in the username and password provided by your ISP and select either WEP or WPA security. Then, choose a new passkey.