Recently, we announced that your organization’s private apps would move from the “Private Channel” (i.e. the “domain.com” tab) to the “Work Apps” tab in the Google Play Store. We envision this Work Apps section as a single destination where users can find all of the applications they need to be productive on mobile. Using Google Mobile Management, G Suite administrators can offer a curated set of both public and custom apps to their employees in the Work Apps section of Google Play.

Previously, however, employees with Android devices that did not support work profiles could not see the Work Apps tab and the apps their admins had curated. This included any users with Android devices running 5.0 Lollipop or less. With this launch, employees with these older devices can now access the Work Apps tab in Google Play (in their personal profile) and the apps their admins have curated. 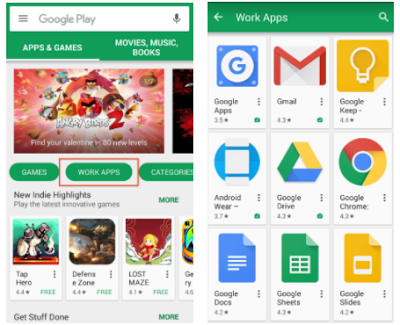 Note that on devices that do support work profiles, the Work Apps tab can only be accessed from Google Play in the work profile.

If your organization recently made the jump to G Suite, you may have employees who previously set up personal Google Accounts using your company’s domain name. With this launch, we’re making it easier to identify and transfer those accounts before they become conflicting accounts.

Using the new Transfer tool for unmanaged users, you can view all personal Google Accounts with email addresses that match the G Suite email addresses for your organization. You can then send emails to those individuals, requesting that they convert their personal accounts to G Suite accounts. Later, you can view the statuses of those requests and cancel them as necessary.

If an employee accepts your request to transfer their account, you’ll be granted access to their data and given the ability to manage that account. If they decline or ignore your request, they’ll be asked to rename their personal account with a different email address when you create a new G Suite account for them. They’ll retain sole access to and control over all of the data in their personal account. 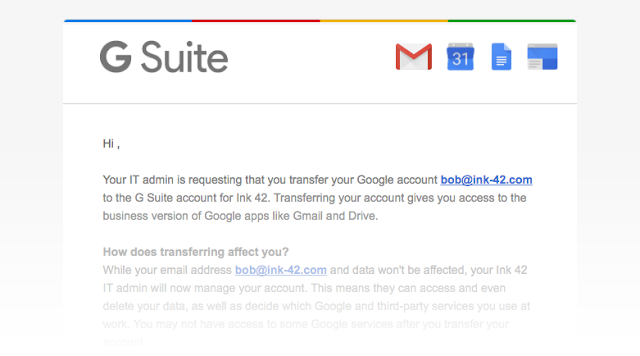 Note that these actions must be performed manually. While you can send requests, cancel requests, and download request statuses for multiple users at once, you can’t yet do so in bulk via an API.

We hope this launch will make the transition to G Suite easier for you and your end users alike. For more information about the Transfer tool, please visit the Help Center.

Previously, each of these policies supported the scanning of the body of email messages and text attachments only. With today’s launch, the policies will also scan the content inside common attachment types―such as documents, presentations, and spreadsheets from different productivity suites―for increased security.

File type detection
The Attachment compliance setting enables admins to specify actions to perform for messages with attachments based on file type, file name, and message size. Previously, the policy relied solely on the file type extension when identifying matches. With today’s launch, we’ll start scanning and identifying the actual file type of attachments, preventing the renaming of most file type extensions to circumvent attachment policies.

Check out the Help Center links below for more information on these security improvements.

Google introducing a new setting in the Google Apps Admin console that gives Apps admins control over whether or not people in their organizations can edit their profile names in Google+.

By default, people can change the profile name that’s displayed for their Google+ profile. The new display name is also used in all other Google products, except for user-edited Gmail usernames. Starting today, admins can decide to disallow name changes. If changes are disallowed, all Google+ profile names that were previously changed by individuals will be replaced by their corresponding names in the Admin console directory.

If admins decide to prevent users from changing their Google+ profile names, we recommend the following to minimize any confusion:

Previously, each of these policies supported the scanning of the body of email messages and text attachments only. With today’s launch, the policies will also scan the content inside common attachment types―such as documents, presentations, and spreadsheets from different productivity suites―for increased security

File type detection
The Attachment compliance setting enables admins to specify actions to perform for messages with attachments based on file type, file name, and message size. Previously, the policy relied solely on the file type extension when identifying matches. With today’s launch, we’ll start scanning and identifying the actual file type of attachments, preventing the renaming of most file type extensions to circumvent attachment policies.

Check out the Help Center links below for more information on these security improvements.

With Google Drive you can keep all your important files in one place, then open them with your choice of apps and devices. Today, we’re offering new ways to work together with Office files, using the Google Drive plug-in for Microsoft Office.

With the new Google Drive plug-in, people using Office for Windows can now open their Word, Excel and Powerpoint documents stored in Drive and then save any changes back to Drive once they’re done 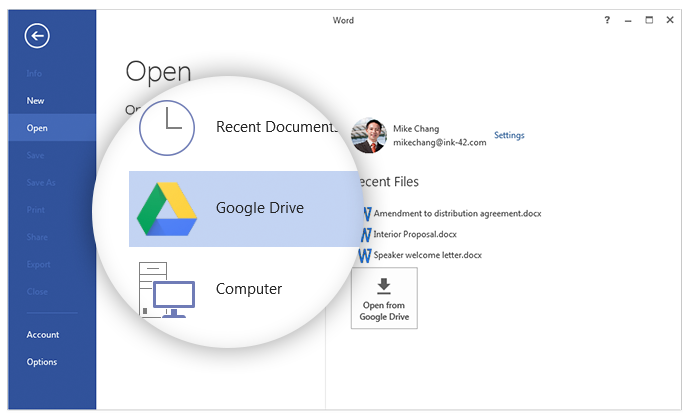 If you’re working on a document, spreadsheet or presentation that’s on your computer, you can also save that file to Google Drive, directly from the Office apps. This is especially useful for sharing files with teams, or for accessing your files across devices. 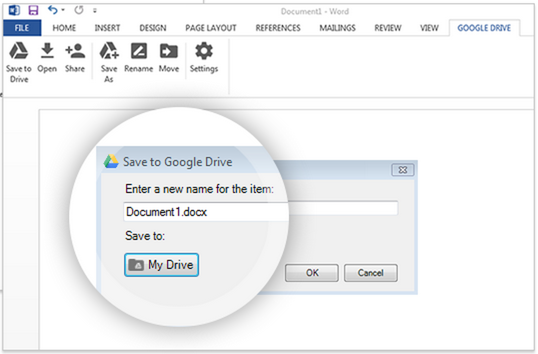 Check out the Help Center links below for more information.

With Information Rights Management (IRM), people using Google Drive can now disable downloading, printing, and copying from the advanced sharing menu―perfect for when the file you’re sharing contains sensitive information that you don’t want shared broadly or leaked. This new option is available for any file stored in Google Drive, including documents, spreadsheets, and presentations created with Google Docs.

To enable this feature, open the sharing dialogue from any Google document, spreadsheet, presentation, or other file in Drive on the web and click on Advanced in the lower right hand corner. Check the ‘Disable options to download, print, and copy for commenters and viewers’ box and click Save changes. This functionality is also available through API.

Google documents, spreadsheets, and presentations for which this feature has been enabled will show a notification at the top of the File and Edit menus

Last year, Google worked with the FIDO Alliance standards organization to launch the Security Key — an actual physical key used to simplify 2-Step Verification with Google Accounts. The key adds a layer of protection as it sends an encrypted signature rather than a code, ensuring that login information cannot be phished.

Once Security Keys have been activated by individuals within a domain, Google Apps admins will now be able to do the following with today’s release:

We are using Security Keys at Google because it makes our lives easier and increases security. With these new controls, Google Apps admins can offer the same benefits to people in their domain.

Check out the links below for more information.

Note: the new admin controls are available for Google Apps Unlimited and Google Apps for Education customers only. Customers using other Google Apps editions can use Security Keys, but people in their domain must revoke their own keys using My Account.

In Google Sheets on the web, if a person wants to make a spreadsheet available for a large audience to see, they can publish the file as a web page. Once that file is published, the person receives a URL that can be sent to whomever they choose or embedded into a website. Today’s launch allows people to publish spreadsheets in five additional formats—as comma-separated values (.csv), tab-separated values (.tsv), a PDF document (.pdf), a Microsoft Excel® spreadsheet (.xlsx), or an OpenDocument spreadsheet (.ods). The URL generated, when opened in a browser, will automatically download the spreadsheet in the chosen format (spreadsheets in these additional formats cannot be embedded). 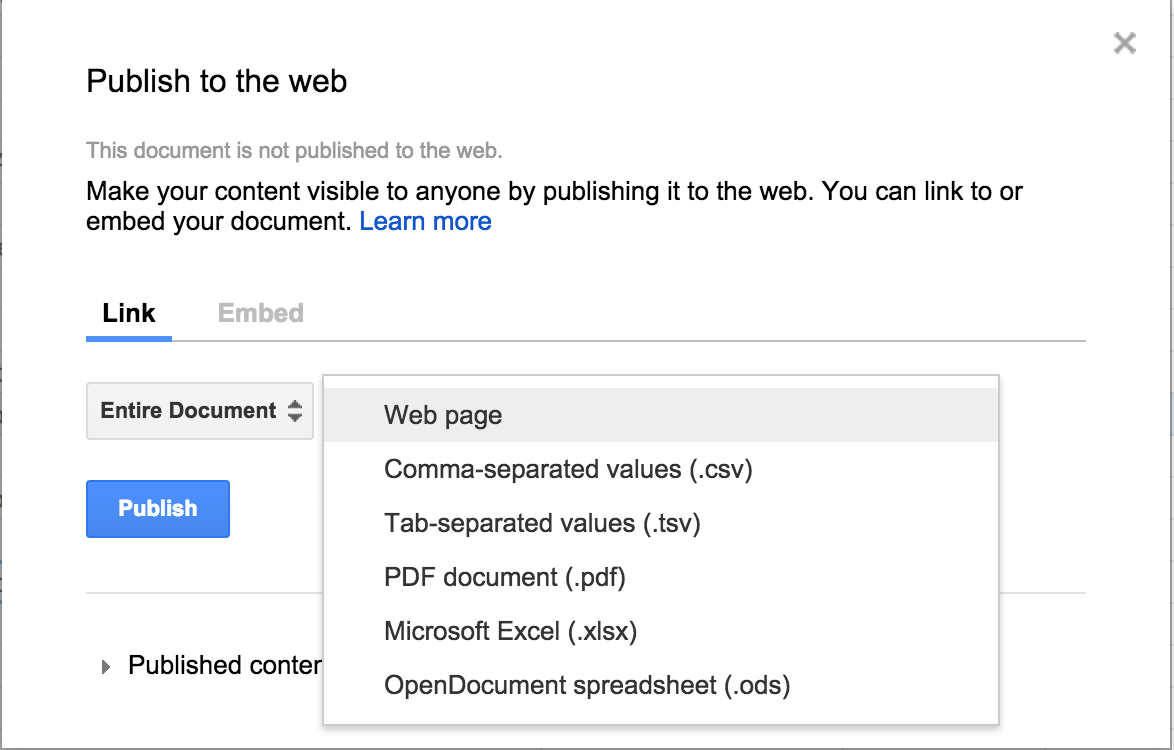 Try out this new feature in Google Sheets on the web today.

Google recently completed the cross-platform rollout of a feature allowing Google Apps customers to share links to Hangouts video calls so that external meeting guests may request to join if not explicitly invited.

Previously, video calls shared with the link required someone in the Apps domain of the Hangout video call to accept those requesting access on the web. With today’s launch, we’ve enabled this accept or reject functionality in the latest version of the Hangouts iOS app.

To accept or reject a request to join a video call on your mobile device, tap the ‘Accept’ or ‘Decline’ button in the pop-up screen that appears when a guest is requesting to join. 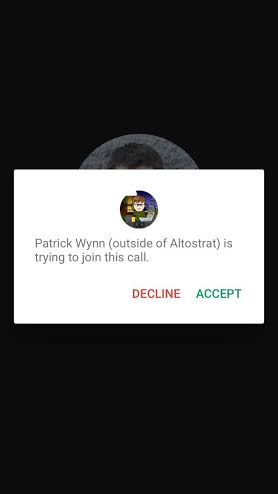 This functionality is coming soon to the Hangouts Android app. 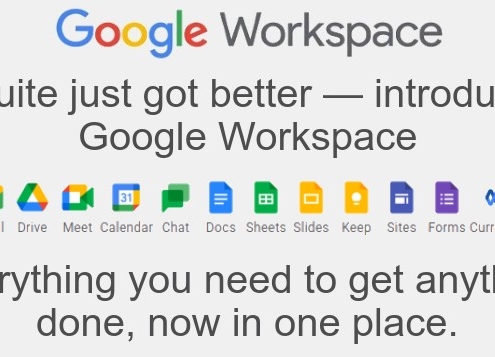