12. Check box next to ‘My Server Requires SMTP Authentication’ and select ‘Use same settings as my incoming mail server.’

Note – My Server Requires SMTP Authentication Should be TICK

Note – My Server Requires SMTP Authentication Should be TICK

Back in April I published a post about the end of support for Windows XP called The Countdown Begins: Support for Windows XP Ends on April 8, 2014.  Since then, many of the customers I have talked to have moved, or are in the process of moving,  their organizations from Windows XP to modern operating systems like Windows 7 or Windows 8.

There is a sense of urgency because after April 8, Windows XP Service Pack 3 (SP3) customers will no longer receive new security updates, non-security hotfixes, free or paid assisted support options or online technical content updates.  This means that any new vulnerabilities discovered in Windows XP after its “end of life” will not be addressed by new security updates from Microsoft.  Still, I have talked to some customers who, for one reason or another, will not have completely migrated from Windows XP before April 8.  I have even talked to some customers that say they won’t migrate from Windows XP until the hardware it’s running on fails.

When Microsoft releases a security update, security researchers and criminals will often times reverse engineer the security update in short order in an effort to identify the specific section of code that contains the vulnerability addressed by the update. Once they identify this vulnerability, they attempt to develop code that will allow them to exploit it on systems that do not have the security update installed on them. They also try to identify whether the vulnerability exists in other products with the same or similar functionality. For example, if a vulnerability is addressed in one version of Windows, researchers investigate whether other versions of Windows have the same vulnerability.  To ensure that our customers are not at a disadvantage to attackers who employ such practices, one long standing principle that the Microsoft Security Response Center (MSRC) uses when managing security update releases is to release security updates for all affected products simultaneously.  This practice ensures customers have the advantage over such attackers, as they get security updates for all affected products before attackers have a chance to reverse engineer them.

Some of the people I have discussed this scenario with are quick to point out that there are security mitigations built into Windows XP that can make it harder for such exploits to be successful.  There is also anti-virus software that can help block attacks and clean up infections if they occur.  The challenge here is that you’ll never know, with any confidence, if the trusted computing base of the system can actually be trusted because attackers will be armed with public knowledge of zero day exploits in Windows XP that could enable them to compromise the system and possibly run the code of their choice. Furthermore, can the system’s APIs that anti-virus software uses be trusted under these circumstances? For some customers, this level of confidence in the integrity of their systems might be okay, but for most it won’t be acceptable.

As for the security mitigations that Windows XP Service Pack 3 has, they were state of the art when they were developed many years ago.  But we can see from data published in the Microsoft Security Intelligence Report that the security mitigations built into Windows XP are no longer sufficient to blunt many of the modern day attacks we currently see.  The data we have on malware infection rates for Windows operating systems indicates that the infection rate for Windows XP is significantly higher than those for modern day operating systems like Windows 7 and Windows 8.

Figure 1: Infection rate (CCM) by operating system and service pack in the fourth quarter of 2012 as reported in the Microsoft Security Intelligence 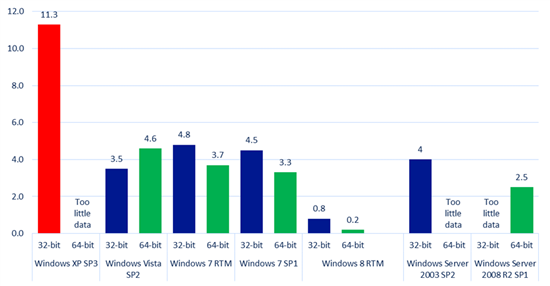 I recently wrote about the findings of a new study on exploit activity that we just published: Software Vulnerability Exploitation Trends – Exploring the impact of software mitigations on patterns of vulnerability exploitation. This seven-year study indicates that attackers have evolved their attacks to overcome one of the key security mitigations that Windows XP has: Data Execution Prevention (DEP). Figure 3 shows the number of common vulnerabilities and exposures (CVEs) that had exploits that would have been mitigated if DEP were enabled compared to the number of CVEs that had exploits that bypassed DEP. With the exception of 2007 and 2008, there appears to be a clear downward trend in DEP’s ability to retroactively break exploits. This trend is not because DEP is no longer effective; rather, it is an indication that attackers have been forced to adapt to environments in which DEP is already enabled—at increased cost and complexity. The evidence is the increasing number of CVEs that had exploits that bypassed DEP. 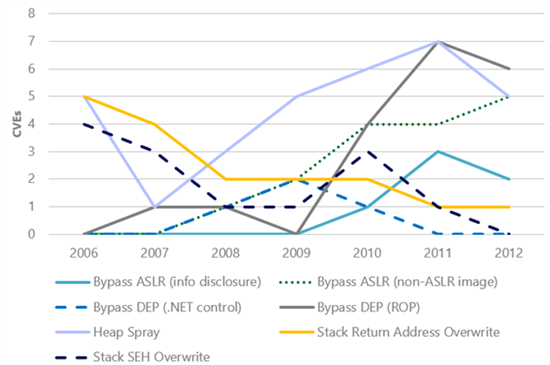 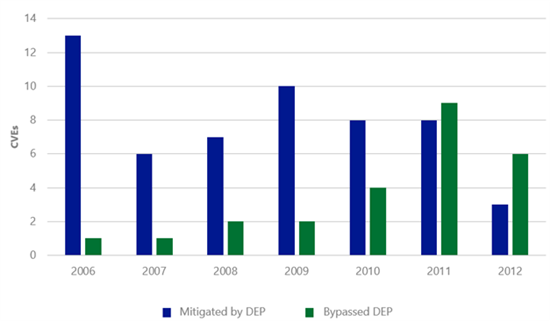 This new data shows us that the predominate threats that individuals and organizations face are now much different than they were when Windows XP Service Pack 3 was released. Turning on the Windows Firewall in Windows XP Service Pack 2 and later operating systems forced attackers to evolve their attacks. Rather than actively targeting remote services, attackers now primarily focus on exploiting vulnerabilities in client applications such as web browsers and document readers. In addition, attackers have refined their tools and techniques over the past decade to make them more effective at exploiting vulnerabilities. As a result, the security features that are built into Windows XP are no longer sufficient to defend against modern threats. Windows 8 has significantly superior security mitigations compared to Windows XP as Figure 4 illustrates. Detailed information on the new security mitigations built into Windows 8 is available in the aforementioned research paper. 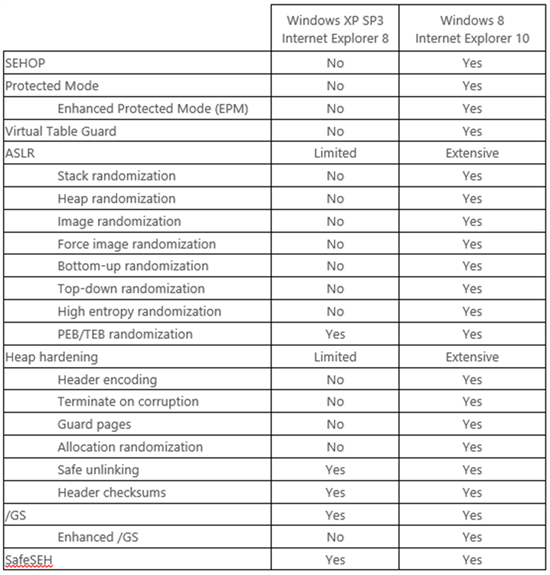 Organizations need a level of certainty about the integrity of their systems. Minimizing the number of systems running unsupported operating systems is helpful in achieving that. End of support for Windows XP is April 8, 2014.

You can use Google Apps Migration for Microsoft Outlook® to import data from a Microsoft® Exchange account or PST file, by stepping through a simple migration wizard. You can import your mail, personal contacts, and calendar events, either all at once, or one application at a time.

My administrator downloaded it for me

If you belong to a large organization, your administrator might have prepared an installation file for you. In that case, all you have to do is install it.

Now you need to choose the Microsoft Outlook® profile you want to import..

3. Choose what Outlook data to import

All that’s left is selecting what data to import…

Finally, you need to select what data to import—your email, contacts, calendar events, or all of the above.

Specify what to import, and whether to import only mail that was sent before or after a particluar date (just check each appropriate box). To speed up your import, uncheck Junk mail and Deleted items as you probably don’t need any of these messages.

Importing before or after a particular date? The date you choose is effective as of midnight GMT. Messages are migrated based on the time they were submitted to the Microsoft® Exchange server as outgoing messages. 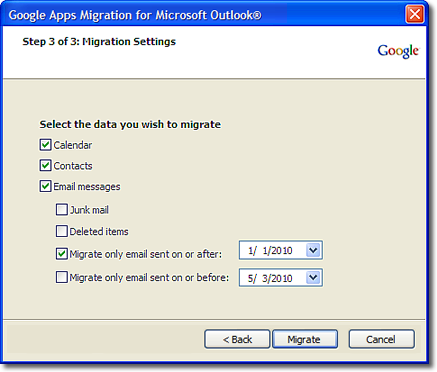 The following data can be imported from the current Microsoft Outlook® profile or PST file:

Note that Microsoft Outlook® Notes, journal entries, and tasks are not imported, since these features aren’t available in Google Apps.

Now just sit back and let your data import. Here’s what to expect…

Once you start the migration, Google Apps Migration for Microsoft Outlook® begins to import data to your Google Apps account. Contacts are imported first, followed by calendar data, and then email. If you’re importing more than one PST file or email account, each file or account is imported in sequence (completing one before moving on to the next).

If you’re importing from a Microsoft® Exchange profile, Google Apps Migration takes a snapshot of data currently in the profile and imports just that; it doesn’t import any messages received afterwards. 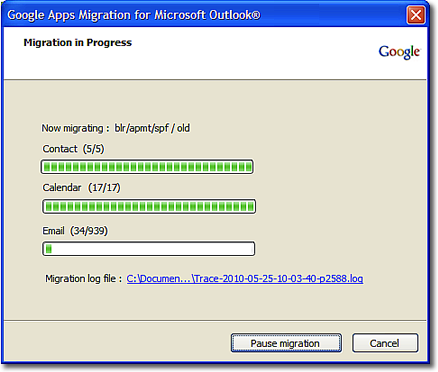 When your migration has finished, you can click Start new migration to import more data (if you’re migrating in stages). Otherwise, click Cancel to close the wizard.

What to expect during migration

Despite this, settings hijacking remains our number one user complaint. To make sure the reset option reaches everyone who might need it, Chrome will be prompting Windows users whose settings appear to have been changed if they’d like to restore their browser settings back to factory default. If you’ve been affected by settings hijacking and would like to restore your settings, just click “Reset” on the prompt when it appears.

Note that this will disable any extensions, apps and themes you have installed. If you’d like to reactivate any of your extensions after the reset, you can find and re-enable them by looking in the Chrome menu under “More tools > Extensions.” Apps are automatically re-enabled the next time you use them.

1. Tap Settings on your home screen.

Your device will now verify your email account settings. Be patient, as this may take several minutes.

12. The email account configuration has been completed. Your email address will now be listed and you can start using the same.

Starting January 29th, you will be able to give a name to Hangouts video calls in Google Calendar events. This name makes it easier for you and other guests to join the video call. Note that this feature is only available to domains that have enabled Google+ Premium Features.

Over the next few days, you’ll notice a new activity stream in Drive. When you open Drive, click the “Details and activity” button (ⓘ) on the top right corner and the activity stream will appear, showing you who has taken action on files and folders in My Drive. You’ll see a rundown of what your team has been doing, such as editing and commenting on notes, adding a new spreadsheet, renaming a presentation, etc. If you select a specific file or folder, the stream will change to show you specific information about that item.