Ransomware attacks are only increasing in complexity and are getting more efficient at exploiting network and system vulnerabilities, leaving organizations with a significant clean-up bill. Modern firewalls are highly effective at defending against these types of attack, but they need to be given the chance to do their job. In this whitepaper we will discuss how these attacks work, how they can be stopped and best practices for configuring your firewall and network to give you the best protection possible.

2018 has seen ransomware trending away from brute force, large scale attacks to focused, planned and manually executed attacks that are much harder to detect and block. Let’s take a look at how the different forms of ransomware operate and what your organization should be doing to minimize vulnerability to an attack.

As the name suggests, targeted ransomware attackers have done their homework. They know who you are, they know your organization, if you are capable of paying the ransom, as well as how much you might be willing to pay.

They have gained access to your organization’s network and can see and control the damage they are causing. And they adapt. If they hit a roadblock they work around it again and again until they succeed. They don’t go after difficult targets with advanced security – why bother? There is enough low-hanging fruit for them to stay in business.

Variants including Dharma, SamSam, and BitPaymer are some of the most well-known and most successful types of targeted ransomware. While these examples vary in their scope and complexity, they share many commonalities in their methods.

Consequences for falling victim to these attacks can be severe. In addition to the significant downtime and lost business productivity is the ransom demand itself. SamSam demands around US$50,000 in bitcoins, while BitPaymer has been known to ask for an eyewatering US$500,000 for encrypted files to be unlocked.

Remote Desktop Protocol (RDP) and other desktop sharing tools like Virtual Network Computing (VNC) are innocuous and highly useful features of most operating systems that allow staff to access and manage systems remotely. Unfortunately, without the proper safeguards in place it also provides a convenient in-road for attackers and is commonly exploited by targeted ransomware.

Not properly securing RDP and other similar remote management protocols behind a Virtual Private Network (VPN) or at least restricting which IP addresses can connect via can leave you wide open to attackers. Attackers that use brute-force hacking tools which try hundreds of thousands of login/password combinations until they get the right one and compromise your network.

2017 was the year of ransomware attacks such as WannaCry and Petya that crippled countless organizations and infected hundreds of thousands of computers around the world. These particular attacks spread by exploiting a vulnerability in Microsoft’s Server Message Block (SMB) network file-sharing protocol. This protocol is ubiquitous on corporate LANs and allows computers to discover each other for the purpose of sharing files and other resources like printers. It can also be used for file sharing outside the firewall if the necessary ports (TCP 139 and/or 445) are opened or forwarded on the firewall.

The particular exploit used by WannaCry and Petya is known as EternalBlue. EternalBlue allows remote code execution by sending carefully crafted messages across the network to the vulnerable SMB service on computers running Microsoft Windows.

In general every networked system, whether running Windows, Linux, Mac OS or another operating system relies on a variety of services for network functionality and occasionally new vulnerabilities are discovered in these services that can have dire consequences if exploited.

In the case of the EternalBlue exploit, Microsoft quickly issued a patch for the vulnerability (MS17-010). But hackers acting rapidly were able to strike before many organizations had time to roll out the patch.

How to Stay Protected from Ransomware

Even in the most diligent organizations, there’s always a gap between vulnerability discovery and patch deployment, which is why it’s so important to have leading next-gen technology protecting your network and endpoints from these kinds of attacks.

So how can you protect your organization from letting these attacks into the network in the first place? And if an attack should somehow penetrate your network, how can you prevent it from spreading, infecting other systems in its wake?

Locking down your organization’s Remote Desktop Protocol access and other management protocols is one of the most effective steps you can take to secure against targeted ransomware attacks. There are numerous ways you can do this – require users be on a VPN before they can access RDP, restrict access to known IP addresses. Your organization’s firewall should be able to implement both of these methods

IPS (Intrusion Prevention System) is a critical security component of any next-gen firewall as it performs deep packet inspection of network traffic to identify vulnerability exploits and block them before they reach a target host. IPS looks for patterns or anomalies in the code that either match a specific exploit or a broader target vulnerability.

As with the EternalBlue exploit discussed earlier, these attacks typically attempt to send malicious inputs to a host application or service to compromise it and gain some level of control to ultimately execute code – such as a ransomware payload in the case of Wanna and Petya.

While Wanna and Petya spread like worms, many ransomware variants leverage social engineering tricks through phishing email attacks, spam, or web downloads to gain entry to your network through more conventional means. These attacks often start as cleverly crafted malware lurking in common files like Microsoft Office documents, PDFs, or executables such as updates for common trusted applications. Hackers have become very effective at making these files seem benign or obfuscating the malware to get past traditional signature-based antivirus detection.

As a result of this new breed of file-based malware, sandboxing technology has become an essential security layer at your network perimeter. Fortunately, cloud-based sandboxing typically doesn’t require any additional hardware or software deployment – it simply identifies suspect files at the gateway and sends them to a safe sandboxing infrastructure in the cloud to detonate active content and monitor the behavior over time. It can be extremely effective at blocking unknown threats like new ransomware attacks before they enter the network.

It’s important to keep in mind that IPS, sandboxing and all other protection the firewall provides is only effective against traffic that is actually traversing the firewall and where suitable enforcement and protection policies are being applied to the firewall rules governing that traffic. So with that in mind, follow these best practices for preventing the spread of worm-like attacks on your network:

Unfortunately, many organizations operate with a flat network topology – with all their endpoints connected into a common switch fabric. This topology compromises protection by enabling easy lateral movement or propagation of network attacks within the Local Area Network since the firewall has no visibility or control over the traffic through the switch.

A best practice is to segment the LAN into smaller subnets using zones or VLANs and then connecting these together through the firewall to enable the application of anti-malware and IPS protection between segments that can effectively identify and block threats attempting to move laterally on the network. 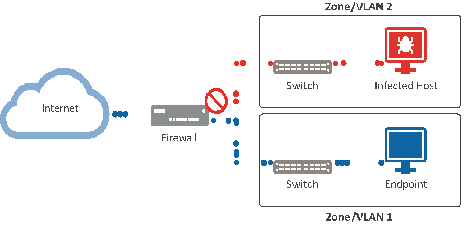 Whether you use zones or VLANs depends on your network segmentation strategy and scope, but both offer similar security capabilities by providing the option to apply suitable security and control over traffic movement between segments. Zones are ideal for smaller segmentation strategies or networks with unmanaged switches. VLANs are the preferred method for segmenting internal networks in most cases and offer the ultimate in flexibility and scalability, but require the use (and configuration) of managed Layer 3 switches.

While it’s a best practice to segment your network, there’s no “best” way to segment a network. You can segment your network by user type (internal, contractors, guests), by department (sales, marketing, engineering), by service, device or role type (VoIP, Wi-Fi, IoT, computers, servers) or any combination that makes sense for your network architecture. But generally, you will want to segment less trusted and more vulnerable parts of your network from the rest, and also segment large networks into smaller segments all with the aim of reducing the risk of threat penetration and propagation.

Sophos XG Firewall includes all the technology needed to help protect your organization from the latest attacks like Wanna and Petya. In particular, XG Firewall includes one of the best performing and most effective IPS engines on the market as recently confirmed by NSS Labs. Our IPS patterns are updated frequently to detect the latest vulnerabilities and, in the case of Wanna and Petya, had received pattern updates well before these outbreaks. And since the initial attacks, additional patterns have been added to catch new variants.

XG Firewall also enables excellent protection against the spread of attacks on your network, but as with any security product it must be given an opportunity to do its job. Proper deployment and configuration is key to reducing the surface area of attack and minimizing the risk and potential scope of propagation. XG Firewall offers flexible and easy segmentation tools like zones and VLANs to secure your LAN and reduce the risk of lateral movement.

Ransomware, botnets, and other advanced attacks will often work their way through your entire IT infrastructure. XG Firewall is part of the Sophos Synchronized Security ecosystem where security products actively work together to stop advanced attacks. The result: faster, better protection – and simpler IT security management.

For example, XG Firewall works with Sophos Intercept X, our anti-ransomware and antiexploit solution proven to stop ransomware at the endpoint. They share real-time threat, health, and status information via our patented Security Heartbeat™, automatically responding to attacks – instantly identifying and isolating infected systems on the network while they are being cleaned up.

Lateral Movement Protection, a new Synchronized Security feature, not only isolates compromised systems at the firewall, but also enlists the help of all the healthy endpoints to isolate an infected host. This effectively isolates it completely, even on the same network segment or subnet. It’s like the ultimate segmentation strategy – isolation at the individual endpoint level.

And you don’t need to rip-and-replace anything to get all the great benefits of XG Firewall, Intercept X, and Synchronized Security. You can deploy XG Firewall in-line with your existing firewall, and Intercept X alongside your existing desktop antivirus client. Together they give you unparalleled protection against ransomware and other advanced attacks. It’s next-gen protection against next-gen threats.